DARK UNDER THE COVER OF NIGHT - free on Amazon for 5 days only! 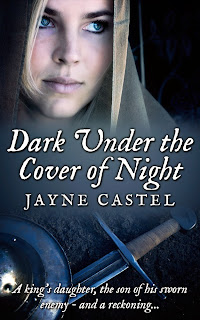 DARK UNDER THE COVER OF NIGHT is currently available free on Amazon (Kindle), for the next 5 days.

This novel is the first of my KINGDOM OF EAST ANGLES series. I wrote it after visiting the Sutton Hoo burial site in Suffolk. The idea of a king being buried in his long ship sparked my imagination. I've always loved the Anglo-Saxon period, and set out to write a story set in this era.

DARK UNDER THE COVER OF NIGHT was only meant to be a one off - but I had so much fun writing it that I found I couldn't stop! The novel was a quarter finalist in the 2013 Amazon Breakthrough Novel Awards (romance category).

Download your free copy of DARK UNDER THE COVER OF NIGHT.

Want to know more about the story?

A king's daughter, the son of his sworn enemy - and a reckoning... The year is 624 AD and Raedwyn, the fiery daughter of Raedwald King of the East Angles, has just been married to a man old enough to be her father. It is a political alliance and on her wedding night, Raedwyn realizes with disappointment that theirs will be a loveless marriage. However, fate has other plans for Raedwyn the Fair. Outlaws ambush her new husband's party on their journey back to his long ship and Raedwyn finds herself captive of a bitter, vengeful warrior - Ceolwulf the Exiled. Ceolwulf has a score to settle with King Raedwald and Raedwyn is his bargaining tool. Caelin, Ceolwulf’s enigmatic son, follows his father on his quest for revenge. Fiercely loyal to her own father, Raedwyn isn't prepared for her wild attraction to Caelin - or for its consequences. Theirs is a passion that could tear a kingdom apart...

Download your free copy of DARK UNDER THE COVER OF NIGHT.

Email ThisBlogThis!Share to TwitterShare to FacebookShare to Pinterest
Labels: dark under the cover of night, free e-book, free historical romance, free on kindle