RULED BY SHADOWS is available for preorder! 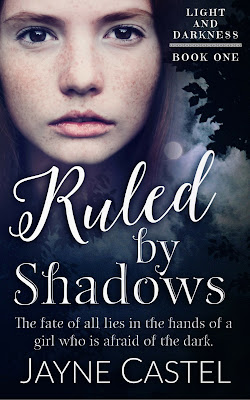 For those of you eagerly awaiting RULED BY SHADOWS—the wait is almost over!

I LOVED writing this book.

You can read RULED BY SHADOWS as a stand-alone, although there will be a three-book arc which explores a larger Epic Fantasy storyline (involving three different love stories).

This Epic Fantasy Romance—Book #1 in the Light and Darkness series—is the story of Lilia, a frightened young woman who is propelled into a life-changing adventure. It’s Epic Fantasy, but not as you know it! Sure, there will be adventure, magic, a quest, and the threat of darkness that risks destroying the world. But our heroine, Lilia, isn’t a warrior princess, an assassin or a sorceress—she’s the kind of girl most of us have met. Just an ordinary young woman thrown into an extraordinary situation.

RULED BY SHADOWS will be released on 18 September 2017!

Click on one of the links below to preorder:

amazon.comamazon.co.ukamazon.com.au
Posted by Jayne Castel at 19:36 No comments:

This blog is dedicated to my Historical Romance novels - however I also write Epic Fantasy Romance!

Since my historicals are also set in the Dark Ages - and so have a slight Fantasy element to them - I think readers should enjoy this detour into the realms of Epic Fantasy Romance. I'm particularly excited about this project, as it's the book I've always wanted to write.

It’s been a ‘work in progress’ for a while, but RULED BY SHADOWS is steadily inching closer to publication.

The book is now in the hands of my beta-readers, and I should hear back from them toward the end of August. That’ll give me some time to make the final changes, sort the proofreading, and send out copies to the ARC readers. The novel will be up on pre-order soon, for release mid-September. As soon as it’s up on pre-order, I’ll post a link up on this blog. 🙂

What’s RULED BY SHADOWS about?

Book #1 of the Light and Darkness series, RULED BY SHADOWS is an Epic Fantasy Romance about Lilia, a frightened young woman who is forced to leave her old life behind and embark on an epic adventure. It’s the story of an ordinary girl thrown into an extraordinary situation. It has everything I love about Epic Fantasy in it (epic adventure, dark forces, magic and huge stakes) but it’s also a character driven story about people we feel we could know. The novel is a romance as well, so the love story is central to it.

In a land ruled by shadows, the fate of all lies in the hands of a girl who is afraid of the dark.

To find out more, watch the book trailer for RULED BY SHADOWS below.

Posted by Jayne Castel at 21:18 No comments: