I hope you've been enjoying this series of guest posts by authors who set their novels in the Dark Ages/Anglo-Saxon period in Britain. It's been great fun, hosting them!

Our third novel comes from Tony Riches: Queen Sacrifice - the story of love and sacrifice in 10th Century Anglo-Saxon Wales.

Enter to win a Kindle copy of Queen Sacrifice

Tony is offering a Kindle (mobi) file of Queen Sacrifice for one lucky reader.

To enter, just leave a comment below with your opinion about Why Wales makes such a great setting for historical fiction, along with your email address. The winner will be chosen on Friday 18 March 2016.

Let's find out about the background and inspiration for Queen Sacrifice - over to you, Tony! 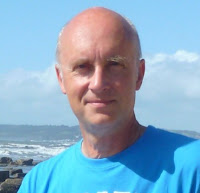 I live in the wild west of Wales, a country with a long history of conquest and occupation by Viking raiders, Roman invaders - and a succession of English kings. I’ve always been interested in the stories of what life was like in early Wales, particularly in the so-called ‘dark ages’ when we had to rely on the oral tradition and writings of a few educated men.

The idea for my first historical fiction novel, Queen Sacrifice began when I was looking into the early history of Wales and realised we had kings and queens, bishops and castles, with the ordinary people becoming  the ‘pawns’ in their deadly battles for power.
Even those not familiar with chess will appreciate why the idea of deliberately ‘sacrificing’ your best piece for a strategic gain is one of the great moves. Even if the sacrifice is not objectively sound, it often has the effect of throwing your opponent off balance and keeping them guessing, so provided perfect material for a novel. 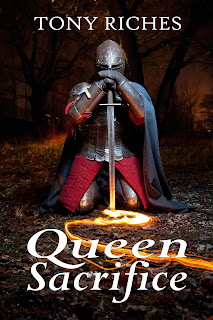 I’ve always been interested in the idea of a chess game ‘coming to life’ since reading Alice in Wonderland as a child, and decided the narrative would faithfully follow EVERY move in the legendary queen sacrifice game, known as ‘The Game of the Century’ between Donald Byrne and 13-year-old Bobby Fischer in New York City on October 17th, 1956.

I started writing, with the whole of 10th century Wales as my chessboard and the people of the north, the ‘Du’ (Welsh for ‘black’) lining up against the Saxon influenced southern Welsh the Gwyn (Welsh for ‘white’). Thirty-two characters are a lot to establish, so I spent the first six chapters setting the scene.

I also realised I only had two roles for women, so came up with a sister for the Du Queen, a maid for the queen of the Gwyn and a ‘housekeeper’ for one of the bishops. I enjoyed researching authentic Welsh names for them all and learning more about how they would have lived.

I enjoyed creating the ‘backstory’ for each of the sixteen ‘pawn’ characters, providing each with specific strengths - and weaknesses! To stop me from not bothering with those who ‘died’ early on in the actual chess game, I decided to only work three moves ahead. This meant suddenly having to explain how a favourite pawn character is ‘taken’ by, for example, a knight, with sometimes shocking consequences.

Another challenge for a narrative set in the 10th century is communication, as few could read or write. This placed those with education at a distinct advantage, particularly in the conflict between Christianity and the old religion, which has been called ‘pagan’ and ‘Druid’, although both are later labels invented by Victorians.

10th century Bishops seemed to have incredible power and freedom, which perhaps is why they are so important in the game of chess, often working together to trap the unwary. Also like their chess counterparts, my Dark Age knights proved moved with surprising speed and took great personal risks to defend their king and queen.

I learnt a lot researching and writing Queen Sacrifice and although I set my next novel The Shell in present day Kenya (where I lived as a child) I decided to make historical fiction my genre of choice. All my subsequent novels are set in the fifteenth century during the ‘Wars of The Roses’, in which I’ve become something of an expert.

I am currently about to publish ‘JASPER’ the second book of my Tudor trilogy, and It’s encouraging that ‘OWEN’, the first book of the trilogy, about Owen Tudor, the Welsh servant who married the queen, has become an international best-seller, reaching number one on Amazon UK and Australia and top ten Amazon US.

Tony Riches is a full time UK historical fiction author living in Pembrokeshire, Wales. You can find out more on Tony’s blog ‘The Writing Desk’ at www.tonyriches.co.uk and find him on Twitter @tonyriches. Queen Sacrifice is available in eBook and paperback on Amazon

To enter, just give us your opinion about Why Wales makes such a great setting for historical fiction (don't forget to include your email address). The winner will be chosen on Friday 18 March 2016.