You voted, and I listened! A couple of months ago, I did a reader questionnaire on Facebook on what series I should write in the second half of 2021. One series idea outshone all the others ... and so that is what you shall be getting!

Book One in the Guardians of Alba series will be out at the end of July 2021. Here’s the series overview:

They will risk everything to protect Scotland from the English—even their hearts.

A coven of Scottish witches have sworn to defend Alba from invaders. Meet three dedicated women who will stop at nothing to protect their homeland—and the men who complicate their mission.

Guardians of Alba takes you back to 14th Century Scotland amidst the Wars of Scottish Independence. Immerse yourself in political intrigue, Celtic mysticism, betrayal, high-adventure, and steamy romance.

So ... if you loved meeting Nessa in DRACO (Book 3: The Immortal Highland Centurions) you're in for a treat ... she's going to be the heroine of Book One! 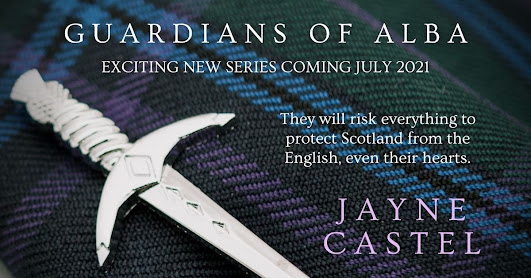 Posted by Jayne Castel at 01:30 No comments:

Stolen Highland Hearts is steaming ahead!

Thanks to everyone who has downloaded a copy of the first two books in the STOLEN HIGHLAND HEARTS series (HIGHLANDER DECEIVED and HIGHLANDER ENTANGLED) ... and to those of you who are so keen you've pre-ordered Book 3, HIGHLANDER FORBIDDEN!

Wow! It's been quite a ride so far ... I'm delighted how much readers are enjoying the series. We've earned the coveted orange best-seller flag from Amazon a few times now.

Stolen Highland Hearts is probably my most classically Scottish, character-driven series so far - and that's clearly what readers want, so I'll be writing more books in this world.

The Mackays of Farr is a family I've fallen in love with. Connor, Morgan, and Jaimee's stories have really touched my hearts ... and of course they will all have children, who will have their own stories in the future!

So thank you once again, dear readers, for loving this series as much as I do! 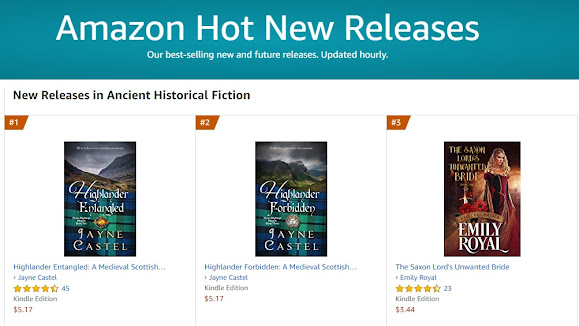 Posted by Jayne Castel at 01:24 No comments:

Posted by Jayne Castel at 17:56 No comments:

I've had a few requests for a definitive list of all my books to date—and the best order to read them in!

I did a count and realized that I've now published 25 books. I started publishing in 2012 so that's not bad going in 8 years!

If you're new to my books, this list should come in very handy! 💖

Posted by Jayne Castel at 18:06 No comments:

The whole SISTERS OF KILBRIDE series is available!

I've been a bit behind on keeping this blog updated - sorry about that everyone! The great news is that, in the meantime, I've published two more books and completed a series.

I give you THE SISTERS OF KILBRIDE!

This is a spin-off of The Brides of Skye series, and is set in 14th-Century Isle of Skye, Scotland

They took the veil in order to retreat from a harsh world. But even behind the walls of an abbey, they cannot escape their fate—or the men that will be their destiny.

Go back in time to 14th Century Isle of Skye ... and meet three feisty nuns: Ella, Leanna, and Coira. Love reading romances about second chances, forbidden love, women in jeopardy, reformed rogues, redemption and healing wounded hearts in a richly detailed historical setting? This action-packed series set in Medieval Scotland is for you!

What readers are saying:

“Every once in a while there comes a book that touches your heart like no other. This is one of them!” ★★★★★

“I really enjoyed Unforgotten by Jayne Castel. It engaged all of my senses and kept me thoroughly engrossed.” ★★★★★

“There are almost no words for this emotional roller coaster. Jayne has once again given us a book that will remain in our hearts. The story was heart-wrenching and truly made me cry more than once.” ★★★★★

"This was a bingeworthy tale ... the characters were phenomenal, as was the captivating plot." ★★★★★

"Oh my gosh, this was soooooo good!! Lots of action, danger, twists and turns, adventure and of course, hot passion abound throughout the story." ★★★★★

"If you love well written stories with well-developed characters and lots of suspense, action, and emotion, this is the book for you. Did I mention wonderful love scenes? *sigh!* It has everything! I couldn't put it down and when I had to, I couldn't wait to pick it up again. It's that good!" ★★★★★

Dive into the series with Book #1 here!

Posted by Jayne Castel at 15:55 No comments:

Woo hoo, Book #2 in The Sisters of Kilbride series will be live in just a few hours! The ARC reviews for AWOKEN are coming in now ... and wowza, the readers are loving it so far! I'm so excited that you're enjoying Ross and Leanna's story. 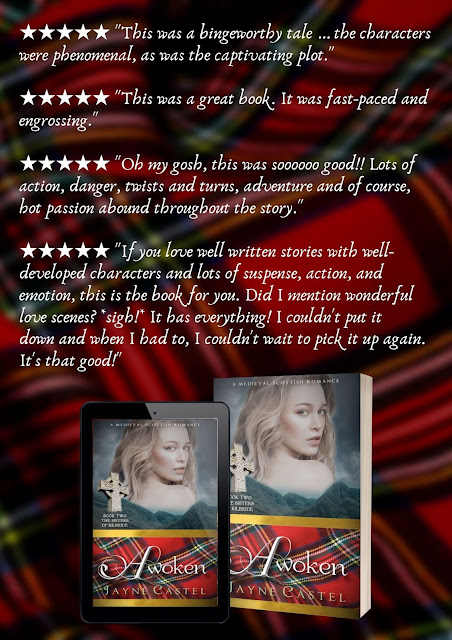 To celebrate the launch, I'm also sharing the first page of AWOKEN with you here—enjoy! 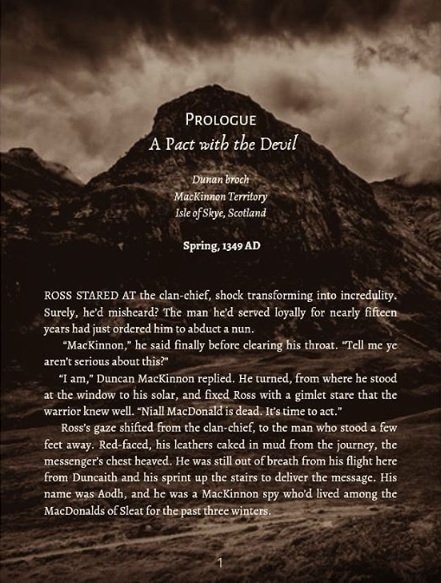 AWOKEN (Book #2: The Sisters of Kilbride)

A novice nun stolen away by a ruthless clan-chief. The warrior who must turn his back on everything to save her. The emotional tale of a woman in jeopardy and a reformed rogue in Medieval Scotland.

Leanna MacDonald never wanted to become a nun—but it was the only way her father could protect her from the attentions of a cruel man who wanted her as his wife. However, when Leanna’s father unexpectedly dies, her recently widowed former suitor decides he will have her no matter the cost.

Ross Campbell has served Clan-chief MacKinnon loyally for years. But his allegiance is tested when MacKinnon orders him to steal a novice nun away from Kilbride Abbey. Ambitious and arrogant, Ross has worked hard to gain his position as MacKinnon’s right-hand. He doesn’t want to tear this young woman away from her cloistered existence, yet he won’t risk everything he’s worked so hard to obtain.

Leanna’s abduction is the turning point in Ross’s life. He soon realizes that MacKinnon will ruin this brave, spirited young woman—and when she pleads with him for help, Ross must make a decision. How far will he take his loyalty to a man who doesn’t deserve it?

Get your copy of AWOKEN here:

Posted by Jayne Castel at 16:15 No comments: 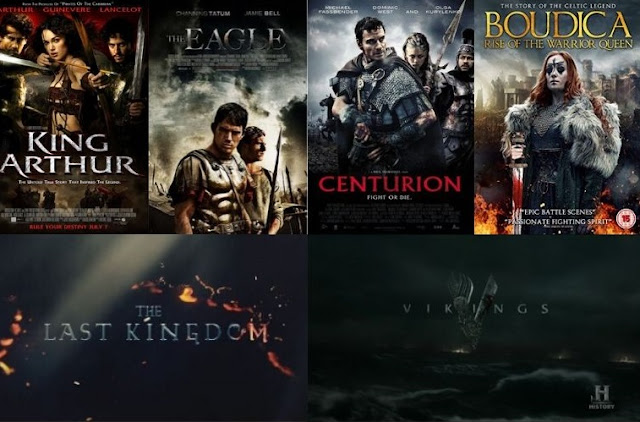 I adore movies and series set in the Dark Ages ... but I must admit it takes some effort to find them.

Over the years I've devoured material set in this time period. Experts typically argue about what period the 'Dark Ages' actually covered. My definition is fairly broad. For me it's anytime from the 1st to the 11th Century. In Britain that covers the Roman occupation of right up to the Norman conquest in 1066 AD. Some historians include the Medieval period in the Dark Ages, but I don't. Even without including the Middle Ages, it's a huge period, and yet there isn't enough (in my opinion) movies and series set there! Maybe they need to make one of my books into movie or Netflix series!

A couple of these movies (The Eagle and Centurion) deal with the mysterious disappearance of the Ninth Legion ... which is a coincidence because my secret project (out mid-2020) starts with this too!

Here are some Dark Ages films and series worth checking out!

King Arthur
King Arthur is a 2004  historical adventure film that reinterprets Arthur as a Roman officer rather than a medieval knight. Despite these departures from the source material, the Welsh Mabinogion, the producers of the film attempted to market it as a more historically accurate version of the Arthurian legends, supposedly inspired by new archaeological findings. The film also replaces the sword in the stone story with a more dark and tragic backstory of how Arthur claimed his sword Excalibur.


Centurion
Centurion is a 2010 British historical action-war film, loosely based on the disappearance of the Roman Empire's Ninth Legion in Caledonia in the early second century AD. In ancient Scotland, the Ninth Legion liberates a Roman officer named Quintus Dias from his Pict captors. The soldiers are in pursuit of the Pict leader, and Quintus joins their quest. Soon afterward, the Romans' Pict guide betrays them, resulting in the slaughter of all but a handful of men. The Roman survivors try desperately to reach safety, as the indigenous warriors pick them off one by one.


The Eagle
The Eagle is a 2011 epic historical drama film set in Roman Britain adapted from Rosemary Sutcliff's historical adventure novel The Eagle of the Ninth (1954). The film tells the story of a young Roman officer attempting to recover the lost Roman eagle standard of his father's legion in Scotland. The story is based on the Ninth Spanish Legion's supposed disappearance in Britain.


Boudica: rise of the warrior queen
Boudica: rise of the warrior queen is the story of a queen who led an uprising against the might of Rome. Boudica is an innocent sixteen-year-old girl forced into an arranged marriage by her father, the leader of a Celtic Tribe. However her mother will do whatever it takes to protect her daughter; so much so that she takes Boudica and persuades her to flee the village and live in her childhood home, away from an arranged marriage and a miserable life. It is only a matter of time before the past catches up with everyone and Boudica must transform from a girl into the warrior queen of legend.

The Last Kingdom
The Last Kingdom is a British historical fiction television series based on Bernard Cornwell's The Saxon Stories series of novels.The story is set in the late 9th century AD, when England is divided into seven separate kingdoms. The Anglo-Saxon lands are gradually attacked, plundered, and effectively ruled by Viking Danes in many areas. The Kingdom of Wessex remains the last major stronghold against the Danes.


Vikings
Vikings is a historical drama television series inspired by the sagas of Viking Ragnar Lothbrok, one of the best-known legendary Norse heroes and notorious as the scourge of England and France. The show portrays Ragnar as a farmer who rises to fame by successful raids into England, and eventually becomes a Scandinavian King, with the support of his family and fellow warriors. In the later seasons, the series follows the fortunes of his sons and their adventures in England, Scandinavia and the Mediterranean.

Posted by Jayne Castel at 16:04 No comments: