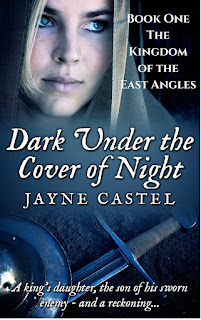 Dark Under the Cover of Night was my first novel, published in 2012, and the story that inspired all the others.

I wrote it purely to please myself... out of curiosity more than anything else. Although I'd written in other genres, I'd never attempted a historical romance before, nor had I ever set anything in this era. However, after a trip to the Sutton Hoo burial site, in Suffolk, England, I couldn't stop thinking about the king (many think it was Raedwald, the 7th Century East Anglian ruler) buried in the great longship.

Who was he? How did he die? What happened to his family?

The seed for Dark Under the Cover of Night was sown.

The story reached the quarter finals in the 2013 Amazon Breakthrough Novel Awards (romance category) and has taken hundreds of readers into my vision of 7th Century Anglo-Saxon England. Now, I'm offering new readers the novel for free, from my website.

Sign up for my newsletter (nothing spammy, I promise!) and receive a free kindle (mobi) copy of the novel!

So what's Dark Under the Cover of Night about?

Raedwyn - daughter of King Raedwald of the East Angles - has just been handfasted to one of her father's ealdorman. Although highborn women wed to strengthen political alliances, rather than for love, Raedwyn still hopes for a happy marriage like that of her parents'. But, her optimism is shattered on her wedding night.

Raedwyn's life shifts unexpectedly when outlaws ambush her new husband's party on their journey back to his long ship. She finds herself captive of a bitter, vengeful warrior - Ceolwulf the Exiled. He has a score to settle with King Raedwald and Raedwyn is his bargaining tool.

Caelin, Ceolwulf's enigmatic son, follows his father on his quest for revenge. Fiercely loyal to her own father, Raedwyn isn't prepared for her wild attraction to Caelin - or for its consequences. In a world where to go against a king's word means death, Raedwyn must decide what matters more: love or duty.

Get your  kindle copy of Dark Under the Cover of Night, for free!