Delving into the Dark Ages - setting novels in Anglo-Saxon Britain 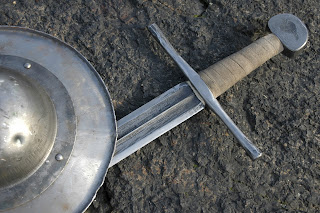 It was a time of kings, battles, blood-feuds and sagas - a time when fate ruled men's lives and swords had names. Welcome to Anglo-Saxon Britannia.

I adore writing novels set in the Anglo-Saxon period. This era has a mystical quality and is steeped in myth, legend and conflict. It emerged from nearly five hundred years of Roman occupation and ended with the Norman Conquest in 1066. Along the way, the face of the British Isles changed forever.

A growing market for Anglo-Saxon historicals

Of course, Bernard Cornwall's The Last Kingdom series, and the recent TV series, has really put this era on the map. However, Cornwall is not the only author out there. Outstanding novels like Hild and The Circle of Ceridwen have also helped popularize this period.

I published my first novel in 2012 (Dark Under the Cover of Night), and since then have noticed an increasing number of those who write in the 'Dark Ages'. There's great fodder for stories in the Anglo-Saxon period - from tales of heroic warriors, forbidden love, battles for power, and kings and queens who must make terrible choices. This is the world that many fantasy writers base their imaginary worlds upon. It all started with Tolkien, whose Middle Earth was largely influenced by the language, culture and people of Anglo-Saxon England.

To celebrate this exciting period of British history, and to give you a taster of the talent that's out there - I will be inviting some other authors over to my blog over the next week or so. These talented writers will explain why they love writing in this period, and what inspires them.

Note: If you are an author of novels set in the Anglo-Saxon period, and would like to be featured on my blog - please get in touch!
Posted by Jayne Castel at 17:16