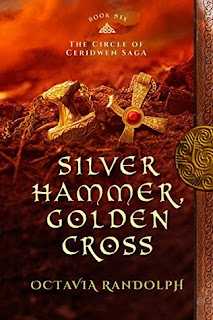 A sweeping, epic novel that picks up around a decade after Ceridwen and Sidroc's story. This is the tale of Ceric (Ceridwen's son) and Ashild (the daughter of Aelfwyn and Yrling). Like the earlier books in this saga, Octavia Randolph uses real historical events to bring her story to life. The peace forged by King Alfred and Guthrum has ended, and war sweeps across England once more.

The characters are great - well rounded with flaws that make them feel like real people. I particularly loved Ashild. A young woman of independent spirit, she struggles with the role that she must play; to marry to strength alliances and wealth. She and Ceric are childhood friends, and both their families wish them to wed. However, despite her attraction for him she wishes to choose her own fate.

Likewise, Ceric is a young man coming to terms with his own place in the world as he reaches manhood and must fill the gap left by his uncle.

Unlike the earlier books in the series, this one is told in third person narrative (rather than first person). This creates quite a different tone - less intimate, more epic. We move from Four Stones (in what is now Lincolnshire, I guess) down to Kilton on the south coast of England, and then across the water to Gotland in Scandinavia. Ceric and Ashild are the main POV characters, although we also spend some time again with Ceridwen and Sidroc, which I enjoyed.

What I love most about Octavia Randolph's books (apart from the memorable characters) is the way she brings 9th Century Anglo-Saxon England to life. She has done vast amounts of research and it shows, not in an 'info-dump' way but in a rich, detailed tapestry. She really brings you there. I particularly loved the descriptions of the food!

The story also highlights the conflict between the paganism and Christianity at this time, hence the title of this book. Ashild carries the silver hammer of Thor from her father, Yrling, and a golden cross from her mother, Aelfwyn, around her neck.

There are quite a few battle and fight scenes in this book that were really well done. There are some great action scenes toward the end of the book - but I'll say nothing about those as I don't want to spoil the story for readers!

I look forward to reading the next installment in the Ceridwen saga - highly recommended five-star read.

Buy a copy of Silver Hammer, Golden Cross on Amazon.com
Posted by Jayne Castel at 01:47