Book review: THE KING'S MAN by By Elizabeth Kingston

I loved the grittiness of this historical romance. 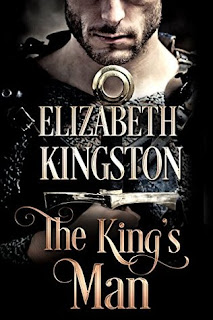 It can be difficult to portray a ‘warrior woman’ in romance, without resorting to cliché or creating a parody or watered down character who could never have, in reality, survived. However, our heroine is a tough young woman who has been groomed by her mother to one day lead the Welsh against the English king.

Gwenllian of Ruardean learns early on how difficult it is to be a female warrior in a man’s world; in order to maintain her position as a leader of men, she had to prove herself to be stronger, faster and cleverer than any man – a struggle that exhausts her.

Our hero is Sir Ranulf, an English knight with a dark past. Gwenllian had been promised to marry Ranulf’s step-father, but that never came to pass as Ranulf murdered him. Years later, she is still bitter about the future she believes he took from her. They meet after Ranulf is badly injured by Gwenllian's men. Once he has healed, Ranulf is rude and dismissive towards Gwenllian and when she bests him in a physical fight his resentment grows. However, as the story progresses a tense but all-consuming bond develops between the two of them.

The romance between Ranulf and Gwenllian is intense and sexy. Gwenllian is strong and determined but secretly vulnerable and lonely, whereas Ranulf only lives in self-imposed isolation, as he is plagued by the terrible events of his childhood and the murder he committed.

This historical romance was refreshingly free of stereotype, was beautifully written and had memorable, flawed characters who both undergo considerable change throughout the story. If I had one issue (albeit a small one), I would have like to see our hero truly lose his self-protective shell at the end; he never really lets his guard down which prevented the resolution from being as intense as it could have been.

I recommend this novel to anyone who likes their historical romance with a bit of realism and grit.

Purchase THE KING'S MAN on Amazon.
Posted by Jayne Castel at 21:11