THE DEEPENING NIGHT: free for two days only! 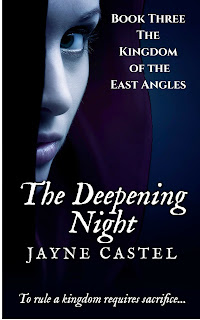 Every author has their favorite novel. Mine (so far...) is THE DEEPENING NIGHT.

Each novel develops its own personality, its own uniqueness - and I love all the books I've published. However, THE DEEPENING NIGHT is the one with a special place in my heart. The novel has an emotional power that made it a joy to write.

It's the story of an arranged marriage between two strong-willed individuals. The tale of incredible love. Annan and Saewara captivated me from the beginning of their story. They are from warring kingdoms, and have every reason to hate each other - but, they are both more alike then either realize.

As a Christmas present to all my readers, who have not yet read this novel, I am offering THE DEEPENING NIGHT on Amazon Kindle for free, for two days only: 18-19 December 2016.

Here's what readers have said about THE DEEPENING NIGHT so far:

"I enjoyed this book way too much. So much that I was lost to my family until I was finished. It was an emotional roller coaster. The action was intense and the love is unforgettable. A heroine that proves herself in a man's world and a hero that can handle a strong woman. A battle for freedom and a battle to understand that love comes when we least expect it. This story has everything and the only disappointing thing about it was that it ended."

"Such an amazing book. Surely the best book I read this year and one of the best I've ever read. Beautiful story and I could sense the sadness and the happiness of the characters. I cried while reading, which always makes a book better for me! Loved it!"

Here's a bit more about the novel:

Annan of the Wuffingas is now King of the East Angles; following the kingdom's humiliating defeat to Mercia six months earlier.

He is attempting to make a new start for himself, and his people, when he receives an order from Penda of Mercia - the king he has sworn to bend the knee to.

He must marry Penda's sister - the recently widowed, Saewara of Tamworth.

Saewara, free of one bullying husband, only to be promised to another, is filled with despair at the news.

Both Annan and Saewara are embittered by the sacrifice they must make for their kingdoms: Annan had been planning to wed another, a maid now promised to his brother; while Saewara, numbed by life, had planned to become a nun.

Wyrd, fate, has other plans for Annan and Saewara.

What begins as a forced marriage, develops into a battle of wills, and slow-burning passion between Annan and Saewara; two proud individuals, who must come to terms with more than an unwanted marriage. THE DEEPENING NIGHT is a tale of adventure, love and courage that will change, not just their lives, but the course of history.

Here's a sneak preview of one of my favorite scenes from the book:

Saewara blinked back tears and forced herself to raise her chin and walk with what little dignity she still possessed onto the dance floor. Fortunately, Annan did not look her way. His hand was warm and strong in hers. She did not want to admit it, but his warmth suffused her hand and forearm, and gave her strength. Her fingers tingled from contact with him; a sensation she had never felt when taking her late husband's hand.

He had spoken to her harshly but there had been no roughness in the way he had pulled her to her feet. Despite all that had happened, Saewara felt a strange kinship with her betrothed. They were both humiliated by her brother's continuing delight in making sport of them in front of his ealdormen and thegns.

There would be no respite until they left the Great Tower of Tamworth.

Saewara took her place, opposite Annan at the end of the row of dancers and fixed her gaze upon the center of his chest - easier than raising her chin to look him in the eye as he towered above her.

The bone whistle and lyre, which had halted while Penda pressured them to dance, resumed their tune with renewed vigor. The watching feasters cheered and whistled. Ribald comments rose above the cheering and Saewara's cheeks burned even hotter at some of the filth her brother's men shouted out at them.

How I loathe this place, she thought, grinding her teeth in fury. She might have been going to a new home, one where she would be reviled, but the knowledge that she would only have to spend one more night under her brother's roof gave her a grim satisfaction.

The dancers exploded into movement, and Saewara had no more time to think on her humiliation, for suddenly, Annan had taken both her hands and was pulling her toward him.

I should not have drunk so much mead.

It had been years since she had danced. Egfrid had hated dancing, and once the obligatory courtship rituals had been taken care of, he had never taken part in dancing on feast days, or even at Beltaine or Yule. It had been just as well, since he had been a poor dancer, and his brutality that started soon after they were wed, made her loath to touch him.

A strange thrill went through Saewara when Annan's hand rested on her waist for an instant. Then, he twirled her away from him. Saewara's heart pounded against her ribs. The heat of his hand had reached her skin, even through the thick fabric of her tunic.

Remembering the steps she had been taught as a girl, she dipped and curtsied before her partner, before circling coquettishly around him.

The hall roared around her, but Saewara ignored them all, concentrating on the dance. She stepped back toward Annan, and he took hold of both her hands. Together, they ran down the archway of raised arms to the end, before raising their own arms together, while the next couple began their dance.

Breathing heavily, Saewara finally raised her gaze to her betrothed's face. His gaze snared hers and for a few moments, under the privacy of their raised arms, they stared at each other.

Saewara stood, transfixed. A wave of need consumed her; a hunger that took her breath away. She had never experienced a sensation like it before in her twenty-five winters - the intensity of it frightened her.

Download your free copy of THE DEEPENING NIGHT now!