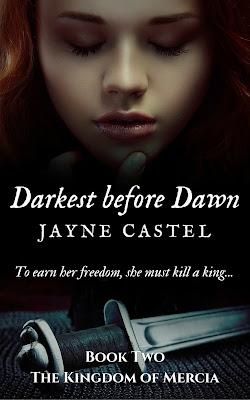 It's 1 February 2016, and that means Book #2 in The Kingdom of Mercia - DARKEST BEFORE DAWN - has launched!

This story focuses on Alchflaed, a Northumbrian princess, and Maric, a Mercian warrior. It's a tale of forbidden life - and the price blind duty can have on us all.

I have based Alchflaed's character around an actual historical figure (although I'll leave the details off here or it will ruin the story!). Details about female historical figures in Anglo-Saxon England are sketchy at best - but there was something about Alchflaed's story that sparked my imagination.

You can find out more about the story, and read sample chapters on Amazon, but - as part of the launch - I thought I'd share one of my favorite chapters from the novel with you.

--
Sign up to Jayne's monthly newsletter and receive a FREE copy of NIGHT SHADOWS (PDF format). Newsletter subscribers will also get sneak previews of upcoming novels, behind the scenes 'extras', snippets about Anglo-Saxon England, from Jayne!