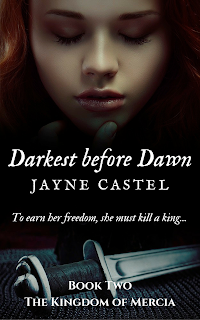 DARKEST BEFORE DAWN, Book 2 in the Kingdom of Mercia series now has a publication date! 31 January 2016 is the big day - although the novel will be available for pre-order in the next couple of days.

What's the novel about?

Princess Alchflaed of Northumbria is a spirited young woman who wishes to choose her own path. Unfortunately, highborn women in Anglo-Saxon England have no say in their choice of husband, and her father promises his daughter to the son of his bitterest enemy.

This attempt at ‘peace weaving’ is not what is seems. Alchflaed’s father orders her to murder her new husband. Charged with this treacherous task, she journeys south to her new home in Mercia.

Maric – a seasoned warrior with a dark past – leads her escort. Princess and warrior find themselves strongly drawn to each other, but they must deny their feelings. Both bound by loyalty, neither can choose their own fates. Alchflaed’s father has given her a terrible choice: to earn her freedom, she must kill a king.

DARKEST BEFORE DAWN opens in 653 A.D. - thirteen years after the first book in the series, THE BREAKING DAWN.

So far, I've written five novels and one novella set in 7th Century Anglo-Saxon England, and this the first one to feature an actual historical figure as the heroine (I've featured plenty of famous men in my previous books). Alchflaed was the daughter of Oswiu of Bernicia, a 7th Century king of Northumbria. The historical records about her are sketchy but there were enough details for me to build an exciting story around her.

However, I will say nothing more about Alchflaed's story at this stage, otherwise I'll risk spoilers...

If you like realistic love-stories set in the dark ages - full of history, intrigue and adventure - then you should really enjoy DARKEST BEFORE DAWN!

During the pre-launch period I will be posting up more details about the book, as well as some teasers - so make sure you watch this space!

--
Sign up to Jayne's monthly newsletter and receive a FREE copy of NIGHT SHADOWS (PDF format). Newsletter subscribers will also get sneak previews of upcoming novels, behind the scenes 'extras', snippets about Anglo-Saxon England, from Jayne!