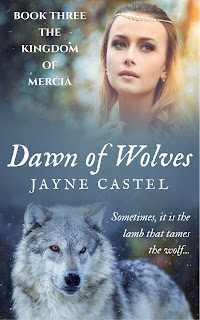 The structural edit of DAWN OF WOLVES (Book #3, The Kingdom of Mercia) is done, and I'm now working on a revised draft of the novel.

This draft is crucial. It's where I begin to polish the writing, and ensure the story flows properly.

I focus on things like the metaphors and similes I've used - making sure they are as original as possible, and tied to the setting. I read dialogue aloud - to ensure it's natural. It's also the stage where I delete, add and move scenes around. This is where the editor's feedback is crucial. As the writer, I'm way too close to the story to notice any structural issues. Yet, these are essential to the pacing and flow of a good story.

For example, in DAWN OF WOLVES, my editor noted that Chapter One needed to start 'in the middle of things' rather than having a bit of scene setting first. Hence, I have deleted the following scene and, instead, woven some of the details into a revised start where our hero, Wulfhere of Mercia, storms Tamworth to take back the throne.

“Your brother has sent word, Milord. When the moon has fully risen, men will open the low gates.”
Wulfhere looked up from where he had been sharpening his sword, Shield Breaker, and fixed the messenger in a cool stare.
“So, he is ready then?”
Werbode – a tall, muscular man with a shock of black hair and a neatly trimmed beard – nodded. Like Wulfhere, the warrior was clad in boiled leather, ready for battle. “He assures us that Oswiu’s stewards are ignorant of our plans. He will be waiting for you in the Great Tower and has a group of men, loyal to him, who will join us once we storm the town.”
Wulfhere cast aside the whetstone he had been using to sharpen the double-edged blade, and rose to his feet.
Finally.
After two years in exile he was about to take back his birthright. Yet, caution tempered his impatience to enter Tamworth.
Is Aethelred loyal?
In truth, his younger brother had always been easier to like than Paeda, his elder brother. Paeda had been a snake. He had betrayed their father on the eve of battle and given away true power over Mercia so that he could marry Oswiu of Bernicia’s daughter, a young woman he had obsessed over. However, wyrd – fate – had turned against Paeda in the end. Rumor had it that Alchflaed, the flame haired beauty Paeda had wed, had slain him while he slept.
Wulfhere had liked Alchflaed, although, in his opinion a woman with such a fiery and willful temperament did not make a good wife. Yet, if she had truly killed Paeda, he applauded her for it. After Paeda’s murder, Alchflaed had disappeared. Both the Northumbrians and Mercians had hunted for her, but she was never found.
“You look pensive, Milord,” Werbode noted, ever watchful. “Does something worry you?”
Wulfhere favored his friend with a thin smile before he slid his sword back into its scabbard.
“We must be wary tonight,” he said, before glancing around the wide clearing where over two-hundred warriors gathered. “I trust few men, and my brother is not among them. When we enter the Great Hall, I want you to keep a close eye on Aethelred.”
Werbode nodded, his gaze shrewd. Wulfhere knew he could depend on the warrior to watch his back tonight.
Dense woodland surrounded the small army. They waited only a few furlongs distant from Tamworth. It was a damp, grey afternoon and the rain was beginning to fall in a light drizzle, the kind of rain that falls silently without disturbing a blade of grass. The rise and fall of men’s voices and the rasp of iron blades – seaxes, swords, axes and spears – being sharpened punctuated the stillness.
Wulfhere’s pulse quickened. It was the sound of men preparing for battle. Long had he awaited this day; long had he planned for it. During the past two years, he had learned patience. He had bided his time, gathered his friends close and built up his strength. There was no point in launching an attack before he was ready. He would only have one chance to retake Tamworth, so he had to do it right.
Wulfhere left Werbode then and walked amongst his men. He listened to their conversations, and exchanged the odd word with some of them. One of his most trusted warriors, Elfhere, waved to him and Wulfhere nodded back.
“Tamworth awaits,” the warrior reminded him. “This time tomorrow you will be sitting upon the high seat, Milord.”
Wulfhere nodded, returning Elfhere’s smile. The tall, blond warrior had left Tamworth after the Northumbrians had taken control of it, and sought Wulfhere out in the wilderness. Elfhere limped slightly, from an old injury, but he was still one of Wulfhere’s best.
Wulfhere continued on his way through the crowd of leather-clad warriors. Morale was good, and they responded to him with smiles and respectful nods. Three Mercian ealdormen had joined him: Immin, Eafa and Eadbert. They were powerful, respected men who had brought their own warriors with them. Wulfhere passed Immin as he circuited the clearing. The hulking ealdorman with a mane of grizzled blond hair grinned at him.
“Fire in your belly yet, Milord?”
Wulfhere grinned back. “Aye. I’m ready for a fight.”
In truth, he was more than ready. He longed to spill Northumbrian blood, to cut down those who had no right occupying his hall or commanding his people.
Soon.
And once it was done he would see Ermenilda again.
Even a year later, he could still picture her clearly. He had known the moment he saw her, that he wanted her. Young and slender, her ethereal beauty had ensnared him. Long, straight blonde hair, a few shades darker than his, flowed over her shoulders, framing a delicately featured face and soulful eyes the color of walnut.
The girl had a demure manner, yet she had held his gaze unflinchingly at the door to her father’s hall. Ermenilda had looked radiant, her cheeks flushed with cold, with snowflakes in her hair.
She was just one more reason he had to take Tamworth.
Wulfhere stopped his circuit around the clearing and glanced up at the sky. The rain was beginning to clear, allowing the watery winter sun to peek through.
Good, we need to be able to see the moon tonight.
Everything depended on this attack going smoothly.
Wulfhere reached up then, his fist closing around the small iron spear he wore on a leather thong around his neck – Tiw, the god of war’s spear. He had not yet renounced the old gods, although the time was coming when he would have to do so. He was not sure he would ever truly cast them aside for the gods of his ancestors meant a lot to him.


Tonight, Tiw would guide his sword and help him regain his birthright.