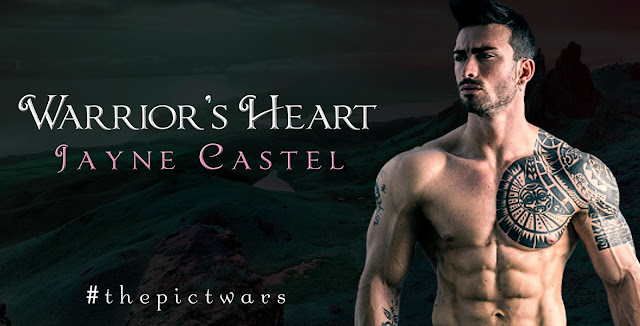 I'm super excited to share Varar and Fina's story with you! To get things started I'd like to share sneak peek from one of my favorite scenes in the book! Check it out below — and remember to mark your calendars for January 22nd!

Dripping wet, her skirts clinging to her legs and her hair plastered against her scalp, Fina led the way back into the broch. The women inside hooted and pointed at the sight of her, soaked and bedraggled.

Fina stared directly ahead, ignoring them. She was saving her anger for one man.

Varar followed her upstairs to his alcove. They had just entered it, walking out onto the fur that spread across the stone floor, when Fina rounded on him.

“Stinking piece of dung,” she snarled, shoving him hard in the chest with her bound hands. However, he did not even budge. “Did you enjoy that?”

“Not really,” he replied with that same bored tone that he had used with his warriors earlier. “But it was necessary.”

“Liar!” she choked, shoving him again. It was like hitting a stone wall. “You loved every moment of it, especially letting them think you’ve been humping me.”

He arched an eyebrow, grabbed hold of her bound wrists, and pushed her away from him. Fina resisted the push, yet she found herself propelled back so she was standing on the edge of her furs.

“That was for your benefit,” he replied. He let go of her and crossed to the beam behind them, where he refastened the chain. “Better for you if they think I’m using you … better for you too if I let the folk here vent their rage. It was humiliating for you, but you weren’t harmed. They’ll stop baying for your blood now.”

Fina’s lip curled. “You must think me a dull-wit,” she growled. “You didn’t do it for me, but for yourself. You’re hoping I’ll be so grateful to you for ‘saving’ me that I’ll spread my legs.”

She had meant to keep that knowledge to herself, to use as a tool to gain her freedom in the coming days. But now the red haze of fury had descended upon her, she forgot her resolve. She wanted to lash out, to wound.

“You have a high opinion of yourself, Fina.” He returned to her and began unfastening her wrists. His voice was still an arrogant drawl, yet his face had changed, his gaze had hooded. “If I wanted you, I wouldn’t go to so much trouble.”

The instant Fina’s hands were free, she lashed out. She struck Varar hard in the solar plexus with one fist, while she slammed the other into his jaw.

He grunted, reeling back from the force of her blows. But he recovered with alarming speed. Fina was not close enough to knee him in the groin. She was delivering another strike, this one at his neck, when he caught her fist and shoved her backwards.

Two strides brought the pair of them back against the wall.

Fina found herself pinned there by the hard, heavy length of Varar’s body. He grabbed hold of her wrists and yanked them above her head, slamming them against the pitted stone.

Panting from rage, Fina bared her teeth at him. “This is what you wanted all along, wasn’t it, Boar?”

They were pressed close. Too close. She could feel the hard, muscular length of his body through her wet clothes. Their position was far too intimate. Her breasts pressed against the wall of his chest, and he had pushed a leg between her thighs to stop her from bringing her knee up and injuring his cods.

He stared down at her. His dark-blue eyes narrow, his face hard. He looked angry, dangerous. Varar was so close she could see the texture of his skin, the length of his dark eyelashes. And she could smell him: a spicy blend of leather and maleness. A tendril of fear curled in the base of Fina’s belly, penetrating her outrage. Had she pushed him too far?

The moment drew out. Then, Varar’s mouth twisted. “I’ll take this as my thanks, Fina,” he murmured. “And worry not … you’re very welcome.”

Be sure to add WARRIOR'S HEART to your Goodreads TBR shelf!

And if you can't wait for the 22 January, you can preorder your copy here: