It's just four days now till THE BEAST'S BRIDE (Book #1: The Brides of Skye) is unleashed!

To celebrate I'm sharing a preview of the novel. This is a pivotal scene that takes place at the beginning of games that our heroine's father has put on in order to force her to wed. Enjoy! 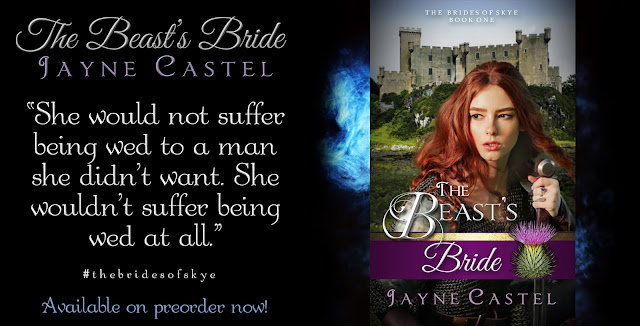 A summer’s breeze laced with the scent of crushed grass feathered against Rhona’s cheeks. She sat upon the stands before the competition field and waited for the first of the strength games: the tossing of the caber.
Erected out of slabs of pine, the stands rose three tiers high. Much preparation had gone into this day. The MacLeod plaid—a crosshatch of yellow, black, and grey, threaded with red—fluttered from the ring that encircled the competition field.
Excited spectators chattered around Rhona, while crowds of village-folk gathered around the perimeter of the field. She sat in-between her father and Adaira, hands folded upon her lap. Since leaving the tower room, no one besides Adaira had spoken to her. Caitrin hadn’t come to the games, as her infant son had a fever, although Baltair was here. He sat farther along the bench, laughing over something with the man seated next to him.
Baltair had not greeted Rhona, or even acknowledged her—not something that bothered Rhona. But it stung that her father ignored her. Even Una stared right through her.
It was all part of her punishment. Rhona’s fingernails bit into her palms. How she wished she was far from here.
Men, clad only in plaid braies, their naked chests gleaming in the morning sun, walked out onto the field. Rhona’s throat closed at the sight of them.
So many … at least fifty.
Most of the faces she didn’t recognize, however, some she did. A blond, grinning young warrior called Connel, and Dughall MacLean. Of course—she’d known he’d compete.
The latter stood at the front of the group, dark blue eyes riveted upon the stands—upon her. Rhona ignored him. Let him stare, she thought. If he wins the games, I’ll scratch his eyes out on our wedding night.
But Connel and Dughall weren’t the only faces she recognized in the crowd. Rhona’s breathing stilled when she saw a big, broad-shouldered figure with short dark-blond hair and a scarred face standing at the back of the group.
Taran MacKinnon.
Confusion swept over Rhona, muddling her thoughts for a few moments. Connel and Dughall she understood, for both of them had made their interest in her clear.
But Taran?
Betrayal followed swiftly on the heels of confusion. She’d been furious with Taran for dragging her back to Dunvegan, yet she’d believed he’d had some sympathy for her plight. What was he doing competing for her hand?
Rhona clenched her jaw till it ached. She glared at Taran, willing him to meet her gaze, yet he did not. Instead, his ice-blue stare seemed unfocused, as if he was deep in thought.
Beside her Malcolm MacLeod rose to his feet. The chatter in the stands quietened, and the crowd of warriors waiting below shifted their gazes to the clan-chief.
“Welcome.” Her father’s voice carried across the field. “For some of ye, Dunvegan is yer home, while for others ye have traveled far to reach us. I greet ye all and thank ye for doing us this honor.”
A few of the warriors below cheered at this, while others beamed up at MacLeod. Malcolm then turned to where Rhona sat silently next to him. “Daughter, stand up.”
Rhona complied, hands still clasped before her. Dozens of hungry male gazes raked over her. She felt as if they were stripping her clothing from her. Rhona raised her chin, barely suffering the indignity.
“Aye.” Her father’s voice held a smug note as he continued. “Lady Rhona MacLeod is a fiery beauty. She’ll make one of ye a fine bride and bear ye plenty of sons … but ye will have to fight for her. The motto of this family is ‘Hold Fast’. The MacLeods face-down our enemies without fear, and we charge toward our destinies. I encourage all of ye to do the same.”
A cheer went up, and when it died away, all gazes fixed upon Malcolm MacLeod, awaiting his next words. Tension rose around them, and Rhona saw the excitement in the contestants’ eyes, their eager smiles. The sight just made Rhona feel ill.
Her father’s command, when it came, fell like an executioner’s axe, splitting the silence. “Let the games begin.”